Let’s be honest, General Elections are not the most exciting thing for 18–29 year olds and in order for us to capture the attention of Māori and get them interested we needed to be bold, talk their talk and make an ordinary channel (social media) extraordinary.

We did this by using Augmented Reality

Leveraging off the popularity of the well-known Māori social media influencer, William Waiirua, Mixt designed and developed the Augmented World of William Waiirua.

Using an illustrated William Waiirua marker card, participants who downloaded the free William Waiirua app were able to place their phones or tablets over the card resulting in the appearance of a moving image of William Waiirua, infusing his popular dance moves and phrases with key messages about voting at the 2017 General Election. 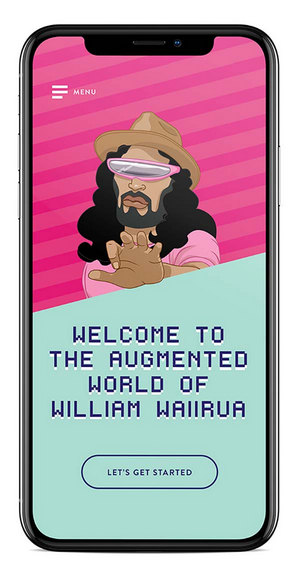 How does the technology work?

Augmented Reality (AR) is a composite view of digitally generated images overlaid onto reality, usually through a phone or tablet.

There are already numerous successful AR apps such as the popular photo sharing app Snapchat with its AR filters and the game Pokémon Go. AR is quickly becoming mainstream with regular use on phones and tablets and is about to explode.

What is the future of the technology?

Augmented Reality is quickly becoming part of everyday life, with AR displays embedded into military helmets, car windshields and more recently regular looking glasses. In the coming years, AR contact lenses will be able to translate languages, interpret equations, predict motion and physics with precision, and even give you the ability to read body-language to analyse others’ inner monologues.

The entire wealth of knowledge from the internet will be woven through glasses and contact lenses with the real world. This mixed reality will be computed, analysed, and  finally superimposed to the user to give a staggering new view on the world around us.

What did we achieve by using this technology?

We took our users on a digital journey where we started a dialogue through social media and enhanced it through AR. The conversations began as general comments then as the campaign progressed we saw a change in our audience as they started to encourage their peers to enrol and vote.

Exactly what we wanted.

The Augmented World of William Waiirua featured in the Digital Government Showcase, which was part of Digital 5 2018, the 4th annual gathering of the world's most advanced digital nations that NZ hosted in February 2018.